Some weeks ago one could attend a couple quite special cinematographic events in Köln: “Frau im Mond” (1929) and “Spione” (1928) by Fritz Lang have been screened at the Filmforum NRW, right next to the Dom, in the framework of the “Filmreihe Fritz Lang – Ikone der Filmgeschichte mit Livemusik”. The third and last screening took place at the Kölner Philarmonie the week after: a film concert with the Gürzenich-Orchester Köln accompanying live Lang’s masterpiece “Metropolis” (1927), which was restored in 2010. This interesting series of screenings, in fact, has been organized by the orchestra itself, together with the Universitäts- und Stadtbibliothek Köln.

As a person who is working in Köln on the film history of the 20s and 30s, and is generally looking forward to new screenings involving films of the first three decades of cinema, I feel quite comfortable in saying that it is quite rare for the cultural scene of Cologne to have a monthly program fully devoted to silent films (considering also that screenings are still limited due to the pandemics).

The first thing I noticed is that the program follows a reversed chronological order, from „Frau im Mond“ (1929) to „Spione“ (1928) and as last „Metropolis“ (1927), and it was somehow curious to approach the screenings having this in mind. For as much “Frau im Mond” can be considered a sci-fi and “Spione” a thriller, they are also both strongly built on romance and, especially for the first one, they do it with a highly dramatic touch. Many of their constitutive elements are already to be found in “Metropolis”, from all sort of technological apparatuses to the very well developed intrigues and characters, so that for the first time I got the feeling that, somehow, “Frau im Mond” and “Spione” could be seen as further specification of the perhaps more complex “Metropolis”. As if Fritz Lang wanted to further develop some aspects that could not get enough attention in the latter.

Der Star dieser beiden Filme ist für mich eigentlich Gerda Maurus, deren nervöse Charaktere der Studentin Friede Velten (in „Frau im Mond) und der russischen Spionin Sonja wesentlich zum Erfolg von „Frau im Mond“ bzw. „Spione“ beigetragen haben. So bright as the moon, Maurus acts with a unique dramatic grace, with intense expressivity and self-consciousness, especially considering that these two works are basically the beginning of her longer acting career. Special guest at the Filmforum for “Frau im Mond” was Gerda Maurus’ daughter, Philine Maurus-Bujard. For somebody like myself, who has grown up basically one century after the silent film era, sitting in front of a person who can testify of her experience within that period, has quite the impact. 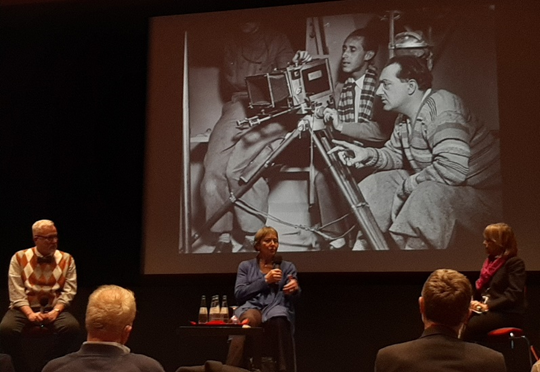 On February the 5th, then, “Frau im Mond” was accompanied for its almost 180 minutes by pianist and composer Mathias Hirth, who is based in Leipzig and is also curator of the Dresdner Stummfilmtage. This was one of my first experiences with silent films of this sort: the film was entirely accompanied by a live soundtrack made of improvisation and original compositions, of electronic vibes and acoustic instruments. As I am affectioned to the classical piano solo, I was very curious to see how this could result, especially for such a long and dense film. Not only the music was able to highlight the delicateness of “Frau im Mond”, but it also intensified its being so visionary and ahead of time.

The scene where music could express itself at the highest is, in my opinion, that of the launch of the rocket: here there are barely “dialogues” (meaning texts), there is a very slow countdown, many close-ups, and lots of introspection. It is in this scene that the excitement of the moon-travellers shows its other face, that of fear, preoccupation, if not panic. Hirth’s music could mirror all this and add more to it: a contemporary musical touch that reminded me especially of the music Hans Zimmer beautifully composed for Interstellar. When they reach the “dark side of the moon” (to indirectly quote other familiar sounds that echoed throughout Hirth’s notes!), all this cumulated tension was suddenly released in a cosmic, intense silence. Helius and his company successfully landed on the moon – and if Maurus is the moon, then Willy Fritsch cannot be nothing but the sun, “helius”.

On February the 9th, then, “Spione” was accompanied by silent-film pianist Richard Siedhoff, based in Weimar and curator of the Weimarer Stummfilm-Retrospektive. I had the pleasure to listen to a couple of his performances just a couple of weeks ago at our Karlsruhe Silent-Film Festival 2022, where he successfully accompanied, among other titles, “Die tolle Lola” by Eichberg. After having heard his musical interpretation of “Spione”, I can confirm my first impression: his music his highly energic and dramatic – dramatically energic, if we want, as if there was constantly a tension forward, an impulse to keep on exploring the film’s narrativity in its full extension – even with a film that lasted about 150 minutes.

The sequence that got most of my attention was that of the train accident: we follow two parallel scenes with cross-cutting montage, on two trains that start their path in parallel, never destined to cross. Though at a certain point their paths cross, as if the movie suddenly revealed its nature: the surface on which the film is developing is not plane and linear, but rather circular, a perfectly built sphere. As it was pointed out after the screening, indeed, one cannot cut Lang’s films, for each cut is functional to the previous and following ones. As for the whole performance, between evocative hints to Rimsky-Korsakov and to ‘O Sole mio, Siedhoff achieved to create a brilliant leitmotif as well, loosely inspired by the well-known James Bond theme music: very catchy in its simplicity, this theme could then creatively cross the entire film (and is still in my mind in this very moment!).

Two (three, including “Metropolis”) meticulously written films, whose merit shall not only go to the genius of Fritz Lang, to the acting skills of the casts, but also and especially to the author of the respective novels, too: Thea von Harbou, Lang’s longstanding screenwriter, coworker and spouse. And it was nice to see them in Köln.

To summarize, last week I could grasp, thanks to films and music, that between Georges Méliès and Christopher Nolan, and even before Alfred Hitchcock, there is definitely Lang, Fritz Lang.

Decals* – or: what do Uwe Boll and the Heimatfilm of the 50s have in common?

The Mole of Torino between cultural identity and history of cinema

A festival diary in times of the corona pandemic – Part 1