(Traduzione italiana di seguito)
… is at least in my opinion the National Museum of Cinema in Turin. Probably I knew already before visiting the Berlinale in 2004 that there was a cinema museum in Turin. But it wasn’t until I saw the film “Dopo Mezzanotte” (After Midnight) by Davide Ferrario in the program of the International Forum of New Films that I spontaneously decided that I had to visit the Cinema Museum in Turin. “Dopo Mezzanotte” tells a love story, the protagonist is a student who works as a night watchman in the cinema museum. The actual protagonist of the film, however, is the Mole Antonelliana, in which the cinema museum is housed, or the museum itself. The film captures the magical atmosphere of the Mole Antonelliana and the museum so well that I not only became enthusiastic about the architecture of the building and the museum itself, but felt almost captured. However, it took a few more years before I was actually able to visit the museum after a hiking holiday on Monte Viso. My visit lasted many, many hours….

There are two reasons – still in my opinion – that I consider the cinema museum in the Mole Antonelliana to be the most beautiful that I know:

The first: the unique building that houses the cinema museum, the Mole Antonelliana.

The second: the design of the museum’s permanent exhibition and the principles on which it is based.

First about the building: The Mole Antonelliana is unique in many ways: A rectangular tower-like building with a slowly tapering dome. Inside there is a very high free space that almost reaches the top of the dome. Im Schnittpunkt der Diagonalen des Raumes schwebt ein Panoramaufzug nach oben zur Aussichtsplattform, die sich über der Kuppel in 85m Höhe befindet. This is followed by a pointed attachment that reaches a height of 167m. In good weather, the view extends as far as the Alps from the viewing platform.

The Mole, which means “large building” in Italian, was originally planned as a syngagogue. But the ambitious architect Alessandro Antonelli’s plans soon exceeded the financial resources of Turin’s Jewish community. Eventually the city of Turin took over the building, first setting up a museum of the Risorgimento there, until the cinema museum, founded by Maria Adriana Prolo, found its place in the Mole Antonelliana.

Why a cinema museum in Turin? To answer the question, a brief excursus into Italian film history is necessary. As the capital of Piedmont, Turin was also the seat of the Italian royal family. Turin was and is a rich city, not least because of the emergence of the automobile industry (Fiat). This is how Italy’s first film production companies such as Itala Film and Ambrosio came into being in Turin. Turin is the birthplace of Italian film, and it is therefore only logical that the Film Museum was established here.

I don’t want to write about further details of Italian film history and the importance of the Mole Antonelliana as one of the most famous and eye-catching landmarks of the city of Turin, because Maria Adorno can do better because she comes from Turin (see the following text).

So let’s get to the cinema museum:
The design of the permanent exhibition is – one could almost say – in a sophisticated way – geared towards its effect on the visitors. In fact, I wrote a first draft of this text as if I had found myself in the great temple hall after entering the museum. But that’s not right, as Maria Adorno told me. Visitors to the museum are first taken to a higher floor, where the part of the museum is located that is dedicated to the “cinema machine”. Then it goes through various stations on the sides of the high and open interior of the Mole Antonelliana downwards [wpml_nbsp] to the so-called chapels.  At the same time, the view descends down into the hall, while at the same time you are exposed to an echo-like background noise, because in the high and free hall with its concrete walls you can hear the constant humming and humming of the voices of the visitors from everywhere. The chapels, which are located further down, are set up for the various Gernres, and only at the end of the tour do visitors find themselves in the large temple hall, which is dominated by the huge statue of Moloch from “Cabiria”. And that is the impression that visitors take home with them – this huge hall remains with them and I also remember it primarily. Whether it was actually the intention in the design of the exhibition to achieve this effect on the visitor can only be guessed at here. In any case, it had this effect on me. Provided that this statement can be generalized, the way in which the exhibition was successfully designed to achieve a certain effect can only be praised.

In the following, however, I do not want to follow the exact sequence of the visit, but rather wander around freely, just as I more or less did not stick to the suggested route at the latest on my second visit to the Turin Film Museum and wanted to get lost in the exhibition …

So let’s first talk about the temple hall, which occupies the very high and free interior.  The name not only alludes to the original purpose of the building, but also makes a reference to film history. As already mentioned, a replica of the newt from “Cabiria” is clearly visible here. Fortunately, there are no hard pews waiting for the visitor in the temple hall, but very comfortable, somewhat futuristically designed loungers, so that one can quietly watch two film montages. One could now philosophize about whether a certain cinephilia, also tending towards the religious, comes into play here, because the smaller side rooms, which are dedicated to individual genres, are also called “chapels” in the English-language brochure of the museum. Of course, it was Italian cinema that also invented the type of “diva”, the goddess, of those actresses who were practically religiously revered such as Lyda Borelli, Pina Menichelli and others. We only know “stars”. …

In fact, the principle that clearly comes into play in the design of the permanent exhibition is a great love of cinema in all of its facets. While many other cinema museums have chosen a more cognitive approach to cinema and film history, which always keeps visitors at a certain reflexive distance and “teaches” them film history, for me the pleasure and sensuality increased steadily over the course of the visit Enjoyment to the extent that I stayed at the various stations for a long time and almost lost myself in the exhibition. In “Frankenstein’s Laboratory” there is a wonderful bubble in an imaginative laboratory setting, and in the western bar one is afraid of having to breathe a lot of lead-laden air. You almost think that Doc Holliday is about to walk in with Wyatt Earp, and it occurs to me that I really want to write something about “My Darling Clementine” – although – or maybe – because I’m not actually a fan of westerns. I digress … Back to Turin …

In all these chapels – [wpml_ nbsp] and only a small number of them are mentioned here – [wpml_nbsp ] monitors offer film excerpts, and the corridors between the individual stations, which are grouped around the large interior, are partly huge Decorated posters of well-known and famous films. The science fiction chapel, where you can take a seat in an interstellar pilot’s chair, is just as successful, and finally there is also the chapel of the absurd, which is based on a scene from Bunuel’s “Le Fantôme de la liberté´” (The Specter of Freedom) is designed.

As already mentioned, on a higher floor of the pier, visitors are introduced to what I would like to call the “cinema system”, which ranges from the production of a film to its distribution. In the National Museum of Cinema Turin, this department has been given the name “The Cinema Machine”, which in turn is an allusion to the way a film is made based on the division of labor, which can certainly be compared with industrial production. It is not for nothing that people talk about the film industry. In this part of the museum, too, the individual stations, such as B. “The director” or “The script”, but also the characteristic features of the “system cinema” designed in detail and with great attention to detail. Let’s just mention pars pro toto “The star system”, “The casting of the actresses” to “The camera”, “The lighting” and other technical aspects.

Let’s try a résumé: As a creative force that rules all departments of the Turin Film Museum, only a great love for cinema can be located. The cinephilia, which is effective and effective everywhere in Turin, does not exclude anything and allows all forms of cinema to remain valid. In this way, the cinema can unfold its full magic and a visit to the Nation Museum of Cinema in Turin becomes a unique sensual experience. A visit that many visitors will probably be happy to repeat. I look forward to my third visit longingly. And now Maria Adorno has the floor. 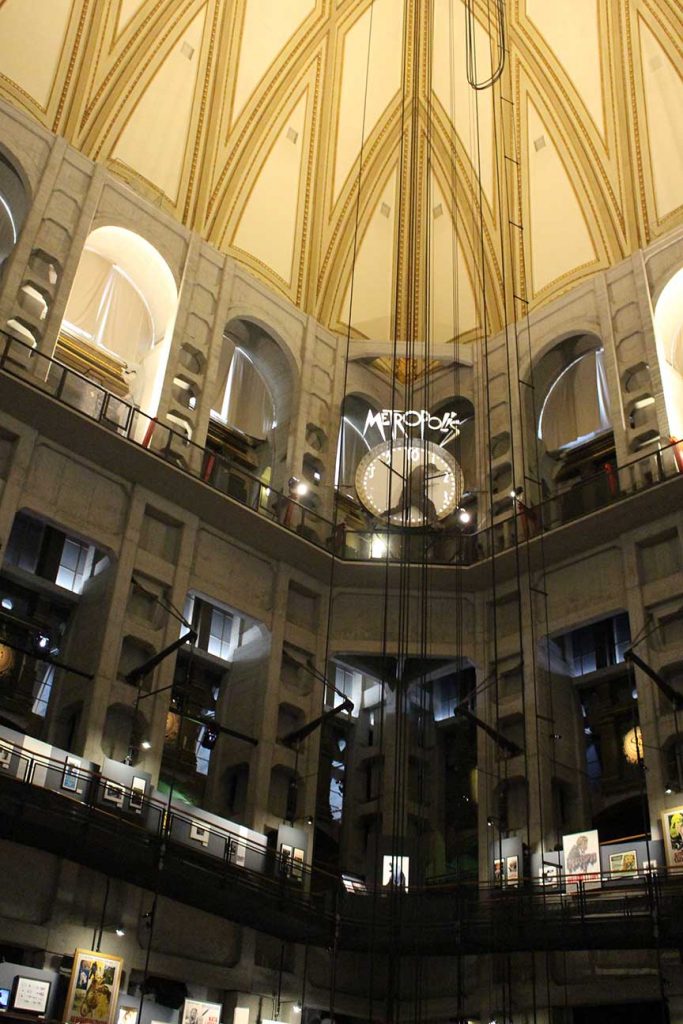 Decals* – or: what do Uwe Boll and the Heimatfilm of the 50s have in common?

A festival diary in times of the corona pandemic – Part 2