If one thinks of 1929 in filmic terms, some films might come to mind: the musical and Best Picture of the year The Broadway Melody by MGM, for instance, was a major success in the United States and abroad as well. 1929 is also the year of Vidor’s Hallelujah!, of the first multiple-language version Atlantic, shot in London by Dupont, and of many important silent films like the UFA production Asphalt or French ones directed by Epstein, Autant-Lara, Duvivier, Feyder. Finally, this is also the year of quite peculiar works as Un chien andalou by Buñuel.

If one thinks of 1929, then, most likely The Trial of Mary Dugan is not one of the main key-references. Nevertheless, I believe it is important to focus on it and foster its memory because of some reasons I will now progressively introduce.

First of all, The Trial of Mary Dugan is the first and only talkie directed by Bayard Veiller and also the first talkie of actress Norma Shearer. Born in Quebec, Canada, Shearer impersonates here the role of a Broadway showgirl and her surname „Dugan“ is of Irish origins – already a relatively international assortment, if we think of the context. As for Veiller, in 1927 he also wrote the homonym stage play and directed several silent films between 1920 and 1925. Five other plays of him have been adapted to the screen after 1929, including a remake of The Trial of Mary Dugan in 1941 directed by McLeod: Veiller produced a couple of them, though never again in his career he directed a sound film. This fact make me think of something: it is relatively well-known how the transition from silent to sound conditioned the career of actors and actresses, divas and vedettes, to the point that many of them were forced to stop their work due to the negative effect of their voices. For instance, Pola Negri did not achieve to shed her Polish accent, which strongly affected her with the American audience.

In the beginning, indeed, vocal performances were a risk that made artists and studios to doubt about their position and strengths. In this sense, silent films represented instead a consolidated environment. For instance, the case of John Gilbert is iconic, as his did not pass the „microphone test“. Something similar might have happened for Veiller, meaning that also directors were similarly affected by the microphone – though this is just a hypothesis. A counterexample is that of Greta Garbo, who passed the test successfully, though also thanks to the very careful strategy adopted by the MGM to protect its main star. The same for Norma Shearer, who also passed succeeded in transitioning from silent to sound. Her case is not as famous as Garbo’s one, though very similar dynamics can be seen through The Trial of Mary Dugan, her first speaking (recorded) role. 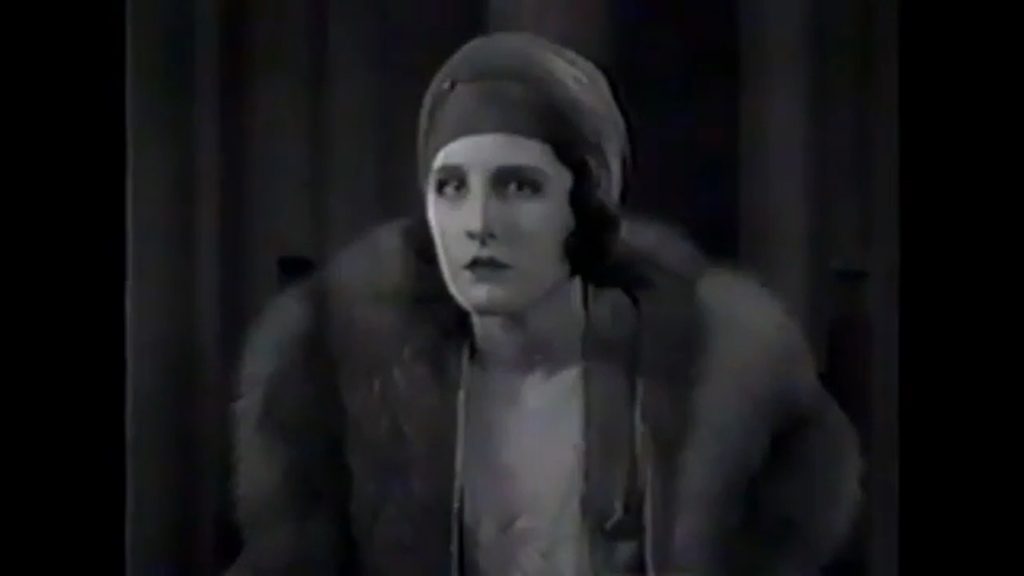 This era is peculiar in many ways, and one of them is for sure the incredible variety of hybrid film forms that characterizes it, which is what Rick Altman called „une panoplie de pratiques sonores“ (a panoply of sound practices) [Vingtième Siècle, 1995]. Intertitles, noises in and off, voices-over, recording techniques, ambient sounds, dialogues, singing and silence were constantly interacting, looking for the most perfect sound-film-formula for all producers, professionals of the sector, and for the audience as well. For instance, it was quite common to produce sound and silent versions of the same film in parallel, in order to make screenings possible also in cinemas not equipped for sound films yet. As pointed out by Hagener,  “Any film produced on the threshold between silence and sound raises a number of issues around translatability as well as differentiation/standardization” [Cinema & Cie n°4, 2004]. In this sense, 1929 is definitely one of the most prolific years to study, because many „first talkie-experiences“ belong to this period (in both terms of performance/production and reception/distribution).

The Trial of Mary Dugan premiered already on April the 3rd in the USA, though the official release was in June. The film is inspired by the play with the same name. This crime film is shot almost exclusively in the courtroom where Mary Dugan is taken after being charged with murder of her wealthy lover – the price to pay being her own life. The film is (still) quite theatrical, as we mostly see either the jury section or the audience. The idea was also to captivate the audience in the cinema theater making them empathically close to the audience in the film itself. Again, a quite theatrical move. Anyway, her brother Jimmy, an attorney, suddenly breaks in the process and stands up to defend his sister. The film is then basically structured in a sequence of testimonies, until one particularly unexpected witness arrives…

What I found very peculiar in the film construction, is the timing of Norma Shearer’s spoken performance. The film was presented in all countries as a 100% talkie and first talkie of both Shearer and Veiller. Also, it is important to point out that this film was a multiple version, which means that other versions were shot based on the same screenplay, though with different casts – one for each country interested in the film production: Shearer’s alter-egos are Nora Gregor in the German Mordprozeß Mary Dugan, Huguette Duflos in the French Le Procès de Mary Dugan“ and Maria Ladron Guevara in the Spanish El proceso de Mary Dugan. In the press of these countries, the film was of course presented in its respective national(ized) version, but also the „original“ film was often quoted. In an interview published on Pour Vous in the summer of 1931, the actor of the French version Charles Boyer comments, after mentioning precisely The Trial of Mary Dugan: „Enfin, le progrès sera dans les « silences ». Moins de verbiage inutile, moins de dialogue, le minimum de texte parlé.“ (Finally, the progress will be in the „silences“. Less useless verbosity, less dialogues, the minimum of spoken text).

Unfortunately it was possible to find and watch only the main anglophone version, but this comment by Boyer supports the idea in relation to the dichotomy silent-sound I am about to present. Before that, here are a stage picture with Duflos, Boyer and Bergère, and the posters of the other versions of the film: 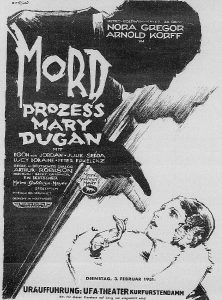 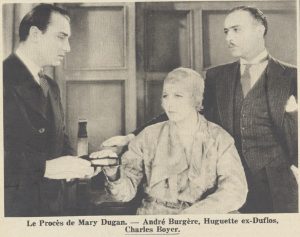 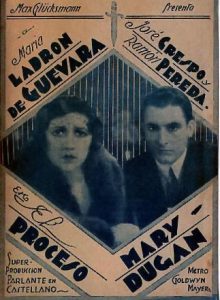 Now, back to the timing of Shearer’s sound-performance, the interesting fact is this: from the very beginning of the film the character of Mary Dugan appears, she emits many sounds (mostly of desperation), she often appears in close-ups, though she never speaks. Especially after the brother arrives, the two exchange many sentences, though we just see the mouths moving and never hear their actual words. This might be justified by the background noise in the courtroom, but the result is still quite paradoxal, since the camera is focusing on them speaking. It is just when Jimmy arrives and when the judge directly ask her a question that she pronounces the timid „Oh, Jimmy, you mustn’t stay here!“ or „Yes sir, I do“ around minute 00:39 and 00:46. Though we must wait until the end of minute 00:57 to hear a more complete sentence, which actually becomes, all of a sudden, a sort of solo performance: from this moment on, in fact, Shearer won’t stop speaking, and in the end she will have spoken for about half an hour, until 01:22 (the total duration of the film being 01:53). In must be also said that this sort of performance is built with a strong sense of suspense, making us really wait for Shearer to talk. Boyer’s words, previously quoted, let me imagine that these dynamics were reproduced in the French film and that silence played indeed a strong role as opposed to the long awaited word. Briefly, this film shows us how sound did indeed reveal silence – a recurrent idea in the press back to the days.

This said, some questions start developing: are we waiting to hear Shearer’s report within the plot, or are we waiting to hear her vocal debut per se? Is her performance framed just by this specific film or is it inextricably linked to the transition from silent-film diva to sound-film star? In the last thirty minutes of the process Shearer cries, smiles, shows signs of stress, desperation, she even stands up and sits again, but she does not speak again – at least not until the very last seconds, the closing words of the film being her own „Jimmy, am I free? Oh, Jimmy, you did it!“. At this point, other questions arise: what was the process about? A fictional crime, or Shearer’s speaking act? Does her final release metaphorically stand for a sort of rite of passage to talkies?

Since the background of this film is the homonym Broadway stage play by the same director, I am obviously not suggesting a fully intentional metaphorical construction. Nevertheless, the timing of the film, the choices of frame and the management of silences, and the visibility given to her „defense“ make it definitely plausible to believe that the Shearer’s vocal performance was indeed a central element added to the already exquisite narrative.

Consequently, one could say that not only Mary Dugan, but also Norma Shearer was finally proved innocent…

Film: „He who gets slapped“ beim Festival in La Rochelle 2019

Imitation of a Festival